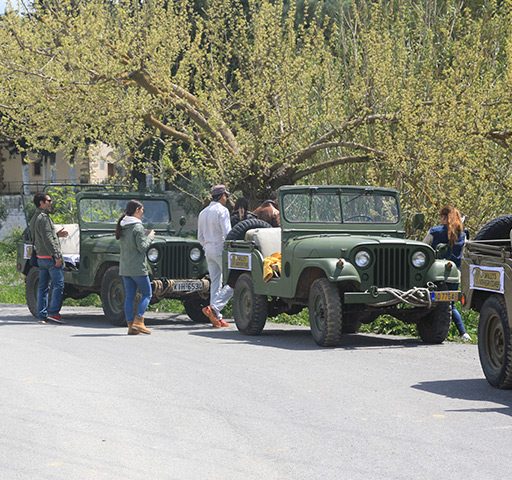 John and Anna are visiting from the US, along with their friend Ashley from the UK and decided upon their visit to go on a Jeep Safari in Crete.

John is a serious hobbyist photographer and he wanted to capture images that would be beyond his own scope, should they just rent a car and roam around on their own. So looking for Jeep Safari Services in Crete, they stumbled upon us and the chance to take that day trip on an Old Timer Willys Jeep, seemed rather appealing to all three visitors, so one good morning,  we were set to go.

We decided to go for an easy option, rather ideal for those who try to ride a WIllys Jeep for the first time. The Lasithi Plateau. An easy ride, mostly asphalt roads with lots of stops on the way for John to do his photography while Anna and Ashley wait patiently in the car.

Everybody “thought” they were excited when we left the hotel in Heraklion and made our way to Lasithi, but once we reached our first stop, then the real excitement came out. Aposelemi dam. It’s hard to miss it, and it’s right on the way to Lasithi Plateau. An extensive water reservoir that supplies the general area of Heraklion with good quality water. But that’s not it. It comes with a “bonus” for photographers, like John. There is a small abandoned village, Sfendile, half sunk into the water of Aposelemi. It’s a beautiful spot for photographers of any kind. The water in the dam rises and falls depending on the season and the weather and so the village Sfendile, is more or less deep into the water, every time you visit. John was mega excited and just to think this was only our first stop. Once John calmed down from going crazy on his Canon 50D, we were ready to move on.

Our next stop was on a much higher altitude. Our destination was a plateau and these usually are on mountain tops. Lasithi Plateau is roughly around 1000m high, so once we left Sfendile the only way was up.

Avdou, is a very traditional looking village. The clean, crisp air really adds to the scenery you have around you once you enter the village. Old -sometimes deserted- homes, old Greek  people enjoying the first or second Greek coffee of the day in the main square of the village, tall trees towering over the main square offering a much needed shade, since from early in the morning, the sun seems to be rather vigilant, from dawn to dusk.

But in addition to all that, Avdou has an extra “feature” for photographers to look for and capture. There are little signs on old buildings and homes which tell you what this building used to be years and years ago. This could be anything… a bakery, a police station, a cobbler’s workshop… anything. It’s interesting to roam around the narrow streets of Avdou and try to capture on camera every single one of them.

We let John loose, to see how many signs he can photograph, while Anna, Ashley and myself, ordered and thoroughly enjoyed a refreshment. Once John returned triumphant (at least a bit), we moved on to our next location. The Lasithi Plateau.

Before entering the plateau, we made a last quick stop for another yet, photography session. There is a line of old windmills just outside of what would be considered as the “entrance” of the plateau. Beautifully preserved and some of them renovated, hanging over the road, overlooking the floor of the entire region, pretty much -roughly- from 1000m high. A beautiful scenery to capture. But the wind was a bit harsh on our faces and the temperature was feeling quite lower then our time in Avdou, so we made that stop as short as possible and headed back on the road. The entrance to the plateau was just around the corner.

What is the diameter of Lasithi Plateau? Well, it’s not man made, so it’s not a perfect circle. The widest distance is about 6km… roughly and the shortest, probably…. 5 (ish). The good thing is that all the villages of Lasithi Plateau are placed on the edge of the diameter. Almost in a circle around it. So the middle area is used for farming only. But! There is always a “but”. Lots and lots and lots of small vintage wind turbines are covering the main floor of the plateau. People back in the day, when farming was the only thing they knew, used them to pump water from the ground. Now that everyone is using the main grid, they are just there to remind us of the past times and… for John to go crazy one more time with his Canon camera.

This is where you go for your shopping when you leave in any other village on the plateau, The doctor, the vet, the bank, the post office… everything is here, including… good food.

We have been for quite some time now on the WIllys Jeeps, going up and up and even though we had a few stops, we didn’t really eat anything on the way and here’s why! Tzermiado hosts several tavernas and Greek food restaurants which are known in the entire island for their cuisine. Every single one, is a “must” try, but we can only pick one at a time, so we sat down in the unnamed taverna. It literally has no sign or name or anything. This is a place where you don’t get to order. They just bring out food. And it was delicious. All of it. Every dish is an explosion of taste in your mouth. We were already hungry anyway, so we were happy to eat anything, but this… this was something else. For all of us. And mind you, for me it was by far, not my first time there.

Ashley was face deep in most of the dishes, while Anna was trying -and kept failing- not to eat “too much” and John… was in heaven. They loved it so much, they want to open a branch in Albany NY.

But all good things must come to an end and so we hit the road again, for our next stop was a treat!

Greece in general has a crazy number of relatively old, quite old, really old -and new- monasteries and Crete is not an exception to this. Our next stop was a beautiful monastery just outside Tzermiado, where you could really feel the energy of the place penetrate you and move  through your body. The monastery of Vidiani. LIving up to everyone’s expectations and generating an impressive amount of “clicks” on John’s Canon camera. It was a good choice for a stop, as the quietness and serene scenery really helped us with all the food storm we went through only moments ago.

Next we decided to drive around the whole circle of the plateau, which would takes through every village in the area, without making unnecessary stops. While on the road, John, Anna and Ashley, pounded me with all kinds of questions about most of the places we had just visited and the ones we were about to. “How old is this? When did they build this? Why is that there? Etc. etc. Happy of course to answer all I could, while keeping my eyes on the road for passing sheep and goats who I didn’t want to run over.

Once we made a full circle and found ourselves in Tzermiado once again, it was time to say goodbye to this amazing location and head back down to Earth.

On the way down we made another stop. This time for a coffee and traditional home made desserts, in Krasi. Another village with a breathtaking view of the lower region. The coffee was great but the desserts were simply amazing. John and Anna promised to add them on the menu of the branch of the unnamed taverna in Tzermiado that they will open back in the states (oh! and the coffee).

It was already 16:00 and everyone was ready to call it a day.

We drove downhill all the way to the central northern road of Crete and made our way to Heraklion. John couldn’t wait to copy his photos on his laptop to get a better idea of how he did today and Anna with Ashley were already making plans for the night.

We exchanged e-mails and I promised to book a table in the branch of the Tzermiado taverna in Albany USA, once it was up and running. I know it’s a long swim, but promises are promises.